Dangerous Edge: A Life of Graham Greene
Official Trailer
Examine the life and works of author and journalist Graham Greene.

Graham Greene’s 50 books spanned seven decades and sold tens of millions of copies in countless languages. More than 100 of his stories have been adapted for television, theater and film — some, such as "The Quiet American" and "The End of the Affair," twice.

As a journalist for 60 years, Greene covered the most dangerous events of the past century: Kenya’s Mau Mau Rebellion, the Vietnam War, Haiti’s “nightmare republic,” the rise of Castro and the fall of the Soviet Union. 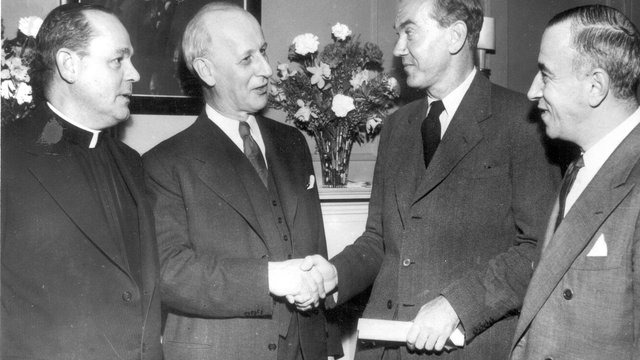 Here, Greene receives the Catholic Book Award for the novel, The End of the Affair.

Dangerous Edge: A Life of Graham Greene, the first American-produced documentary about Greene, weaves his novels, including "The Quiet American," "Brighton Rock," "The End of the Affair" and "The Third Man," and movies into the story of his life and reveals an extraordinary man who traveled the globe to escape the boredom of ordinary existence. Participants include; novelists John Mortimer, John Le Carré and David Lodge, writer Paul Theroux, former CIA operative and author Frederick Hitz, and Greene’s daughter Caroline Bourget.

Greene’s writing captures the essence of what it means to be human: The struggle between faith and doubt, love and betrayal, action and inaction, the individual and the state. Greene famously warned writers to avoid personal, political and ideological ties: A writer must “have a sliver of ice in his heart,” he said, and “be a piece of grit in the State machinery.”

After Greene’s death in 1991, Paul Gray wrote in TIME Magazine, “No serious writer of the twentieth century has more thoroughly influenced the public imagination than Graham Greene.” His influence continues.

Greene is quoted on average 100 times every month in publications around the world, and the British Film Institute recently voted The Third Man the industry’s best British film.

While Greene’s work and influence are apparent, Greene the man remains an enigma. Despite repeated suicide attempts, he lived to be 86. He was a British spy who befriended traitor Kim Philby. He was a committed Catholic who referred to himself as a “Catholic agnostic.” He craved anonymity, yet his writing made him famous.

Greene attributed such incongruities to manic depression. Rather than allowing his condition to cripple him, however, he channeled it into enormous creativity, and from his death wish ultimately sprang an acute awareness of the value of life.