Long before giant theme parks and computer-controlled thrill rides, this country had lots of charming and beautiful amusement parks where families gathered for a cool escape on hot summer days. Great Old Amusement Parks celebrates some of the pre-Disney parks that are still thriving as well as a few of the classic parks that are gone. 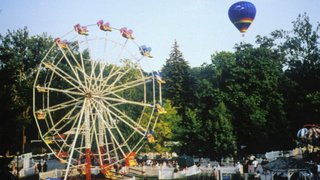 The one-hour special takes you on old wooden roller coasters, vintage bumper cars and many other cool classic rides. We look at some amusing history and discover what's special about these amazing parks that bring people together and keep them coming back.

Great Old Amusement Parks visits places like Playland Park in Rye, N.Y., and Kennywood Park in Pittsburgh, Pa.— the only two parks in the country recognized as National Historic Landmarks. At Northern California's Santa Cruz Beach Boardwalk, we hop on the Loeff carousel (circa 1911), where brave riders can still lean out and grab for the "brass ring." We visit Holiday World in Santa Claus, Ind. — a traditional old "themed" amusement park, where sections of the park represent different holidays: Christmas, Halloween and Fourth of July. It's one place where you can talk to Santa in August.

During the special,  Rick Sebak mixes historical footage, old postcards, vintage music and new video that was shot from California to Connecticut, from Chattanooga to Altoona to create his trademark "scrapbook documentary." Sebak takes viewers across the country to check out the quirky joys of some of these parks. We hop on fun old rides and find out how these places have changed over the years and how they've remained the same. We celebrate these wooden and mechanical old getaways and the communities that support them.

"There have been a bunch of recent TV shows about how technology makes faster, scarier rides, but having grown up in Pittsburgh going to Kennywood, I know there was more to an old amusement park than just thrills," said Sebak. "There are ancient silly rides that rattle and shake. There are flowers and trees and sometimes stunning neon. There's an old-fashioned odor, too -- maybe it's oil-soaked lumber. These are just some of the things that can make an old park genuinely charming in a way that no theme park can imitate. We have tried to capture some of the relaxing, creaking, reassuring funkiness of these traditional parks. Throw in some history, a dozen or so classic coasters, a crowd of fun-loving folks, and you get the picture."

Great Old Amusement Parks includes a lot of pre-Disneyland parks across the country that have somehow managed to survive and are usually referred to as "traditional amusement parks" rather than "theme parks."

"Traveling from Massachusetts to California checking out these parks, we found lots of surprises," Sebak said. "An old revolving fun-house barrel at Whalom Park in Massachusetts. The neon beauties of Lakeside in Denver. The funky old bumper cars at The Oaks in Portland. The Derby ride that's like an adult merry-go-round at Playland in Rye, New York. Classic wooden coasters everywhere. But one of the best surprises was the simple low-tech charm of Story Book Forest at Idlewild Park in Ligonier, Pa. How lucky we are that something so innocent and simple is still around."

What gets people to amusement parks on hot summer days? It may be the wind rushing by on cool old spinning rides or those trusty old hydraulics that make those great old coasters go — or maybe it's the people themselves.

"We walked around several little amusement parks at Coney Island on the Fourth of July with our camera." said Sebak. "It was astounding. The incredible number and the amazing diversity of people, all squeezed into a relatively small area. It made me think of old photos of the huge crowds at Coney Island, reminding me how all of us humans connect sometimes in unexpected ways. We all appreciate a silly thrill, some laughs and good times. There may be no better place to be human than at an amusement park on a holiday."