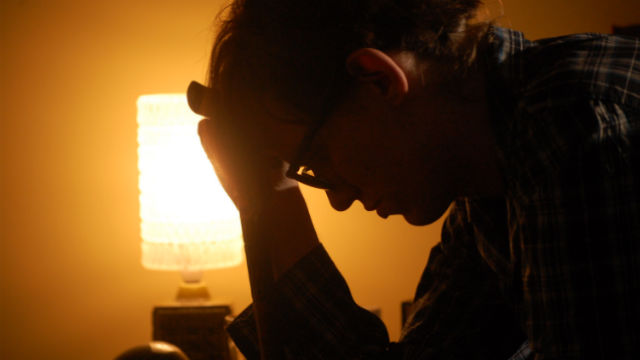 Stephen Hawking getting ready for bed and having an epiphany about radiation with black holes.Darlow Smithson Productions

"Hawking" tracks the physicist’s life story, told largely in his own words. It includes dramatic accounts of his life from childhood through university; intimate footage of Hawking today, including his home routine and his work life at the University of Cambridge; archival footage; and candid comments from family members, friends and colleagues. Computer-generated imagery illustrates some of Hawking’s remarkable discoveries, such as the nature of black holes and the so-called “Big Bang” theory that explains the origins of the universe.

In addition to photos and archival footage of his childhood, the film also depicts the difficult aspects of his life, especially his battle to communicate through his computer, a process about which he meets regularly with technology experts. In addition to the A-list contributors who are also his fans, interviewees include Hawking’s ex-wife Jane, past and current students and graduate assistants, nurses and his literary agent, among others.

Stephen Hawking became paralyzed due to motor neuron disease, but his intellectual brilliance, his refusal to quit and his trademark dry wit — all showcased in "Hawking" — have propelled him to international fame and celebrity. He has sold more than 10 million copies of his groundbreaking book A Brief History of Time, spoken before thousands of people at sell-out live shows and appeared on iconic TV shows such as “The Simpsons” and “Star Trek.” He counts as friends many of the most famous people on the planet. He has met with the pope, experienced zero gravity, received the Presidential Medal of Freedom and much more.