Learn how Lincoln exerted control through the telegraph.

In 1863, Abraham Lincoln proved himself a master of a new frontier — not on the battlefields of the Civil War, but in his high-tech command center: the War Department Telegraph Office, America’s first Situation Room. The Internet of the 19th century, the telegraph, gave Lincoln new powers to reshape leadership and wield personal control across distant battlefields. 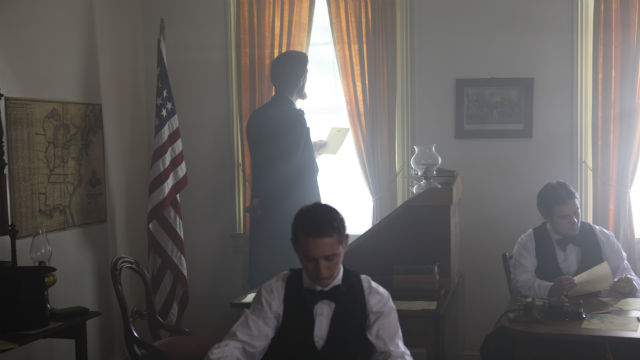 Lincoln and telegraph operators in the war time telegraph office.Courtesy of Tristan Walker

It also connected him to the country in new ways, as information poured in, and allowed him to feel the pulse of the country faster than ever before. The results of Lincoln’s pioneering experiment in communication led to the rebirth of America on the fields of Gettysburg, both in the battle that turned the tide of the Civil War, and in a few words that recast the American ideal as a national creed: the Gettysburg Address. Lincoln@Gettysburg will unfold the greatest turning point in American history: the rebirth of a nation and the dawn of the information age.

Narrated by David Stratharin, the film reveals how Lincoln’s interest in new technologies gave him control never before exercised by any commander-in-chief. Lincoln used these innovations to connect himself to the country — receiving dispatches by telegraph from his generals in the field — and, in turn, transmitting his words and strategic plans for the nation with more clarity and efficiency than ever before.

Lincoln@Gettysburg was produced by Partisan Pictures.

Own this DVD to explore Lincoln's roles as military commander and chief executive.