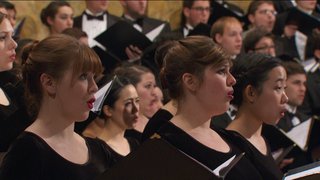 PCK Media, LLC Recognized as one of the world’s leading choral ensembles, the Westminster Symphonic Choir has recorded and performed with major orchestras under virtually every internationally acclaimed conductor of the past 78 years. Prepared for this performance by Joe Miller, Westminster’s director of choral activities, the ensemble is composed of all juniors and seniors and half of the graduate students at the college.

Recent seasons have included performances of Verdi’s Requiem and Bach’s St. Matthew Passion with The Philadelphia Orchestra and Yannick Nézet-Séguin; Berg’s Wozzeck with the London Philharmonia and Esa-Pekka Salonen; Villa- Lobos’ Choros No. 10 and Estévez’ Cantata Criolla with the Simón Bolívar Symphony Orchestra of Venezuela and Gustavo Dudamel; and Beethoven’s Symphony No. 9 with the West-Eastern Divan Orchestra and Daniel Barenboim.