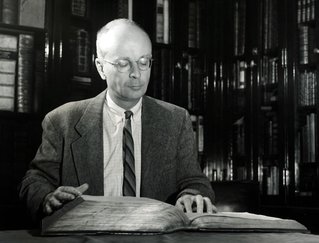 Born in Philadelphia on January 6, 1914, Scheide was the only child of John Hinsdale Scheide and Harriet Hurd. He grew up in a household passionate about music, culture, rare books and the well-being of humanity. His father played the piano, and his mother sang. At age 6, Scheide began piano lessons, and his passion for music did not diminish.

A Bach Scholar who majored in history at Princeton (Class of 1936) because there was no music department, he then earned an M.A. in music at Columbia in 1940. He was the first American to be published in the Bach Jahrbuch, a journal of Bach scholarship. In 1946, Scheide founded and directed the Bach Aria Group, a vocal and instrumental ensemble that performed and recorded for 34 years.

Renowned for his interest in and collection of rare books, Scheide was the owner of the Scheide Library. Now housed in Firestone Library at Princeton University, the collection contains books and manuscripts that he, his grandfather, William T. Scheide, and his father, John H. Scheide (Princeton class of 1896) acquired. The Scheide Library holds copies of the first four Bibles ever printed; materials on the invention and history of printing; books and manuscripts on the early voyages to the Americas; and musical manuscripts of J.S. Bach, Beethoven, Schubert, and many others.

Scheide’s commitment to higher education reached beyond his alma mater. He had long relationships with the College of Wooster, Princeton Theological Seminary and Westminster Choir College, serving each of these institutions for many years as a member of their boards of trustees. For 27 years, Scheide served on the Board of Westminster Choir College, nine of those years as chairman of the board. A frequent lecturer and engaged leader, Scheide underscored his belief in the mission of the college with generous support.