A Place Out of Time

A Place Out of Time — The Bordentown School  premiered May 2010. 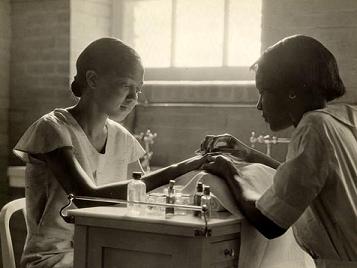 Training in trades, like Beauty Culture, augmented academic studies.Lewis Hine, ca. 1935 For a seventy-year period, when America cared little about the education of African-Americans, and discrimination was law and custom, the Bordentown School was an educational utopia. An incubator for black pride and intellect, it taught values, discipline, and life skills to generations of black children.This is the story of that remarkable school, told through testimony by Bordentown alumni, commentary by historians, and rare archival footage.

In its prime, the Bordentown School was nicknamed the "Tuskegee of the North," after Booker T. Washington's famous Alabama institute. With its 400-acre Georgian style campus, Bordentown could be mistaken for an elite private boarding school. But it was actually a co-educational public school operated by the State of New Jersey which closed the school in 1955, after the landmark Brown v. Board of Education decision.

The story of Bordentown is also the story of black education in America. The film examines the political and historical forces that forged the school's creation and ascent: the violent backlash against Reconstruction reforms, the Great Migration, the Harlem Renaissance, and the birth of the Civil Rights movement. And it explores the causes of its demise, triggered—ironically—by the same advocates for social justice who, by the 1940s, came to see an all-black school as a deplorable symbol of Jim Crow.

The campus Bugle Boy got students and faculty moving every day at the Bordentown School.Lewis Hine, ca. 1935 The film combines multiple narrative strands. On one level, it maps the history of black education in America and the struggle for equal opportunity in the classroom and beyond. This "big picture" is painted by two of the country's leading scholars: David Levering Lewis, the Pulitizer Prize winning biographer of W.E.B. DuBois, and Clement Price, a respected public intellectual and expert in New Jersey black history.

But the film is also deeply personal, as the life stories and memories of Bordentown alumni are woven throughout the narrative. We meet them individually, and during their bittersweet school reunion, held on the grounds of the campus 50 years after the last class graduated. The students at Bordentown came from widely diverse backgrounds and circumstances, but were all equals in the school's safe, separate space. Standards were high, discipline was strict, and the human bonds deep and nurturing. As one alumni says, "They cuddled us. And they kicked us in the butt when it was necessary."

A Place Out of Time offers a much-needed preface to the growing national discussion about our historically black institutions and their role in nurturing identity and accomplishment. What was lost, and what was gained in the march toward equality?

A Place Out of Time: The Bordentown School

| A Place Out of Time: The Bordentown School
Choose Station

A Place Out of Time: The Bordentown School